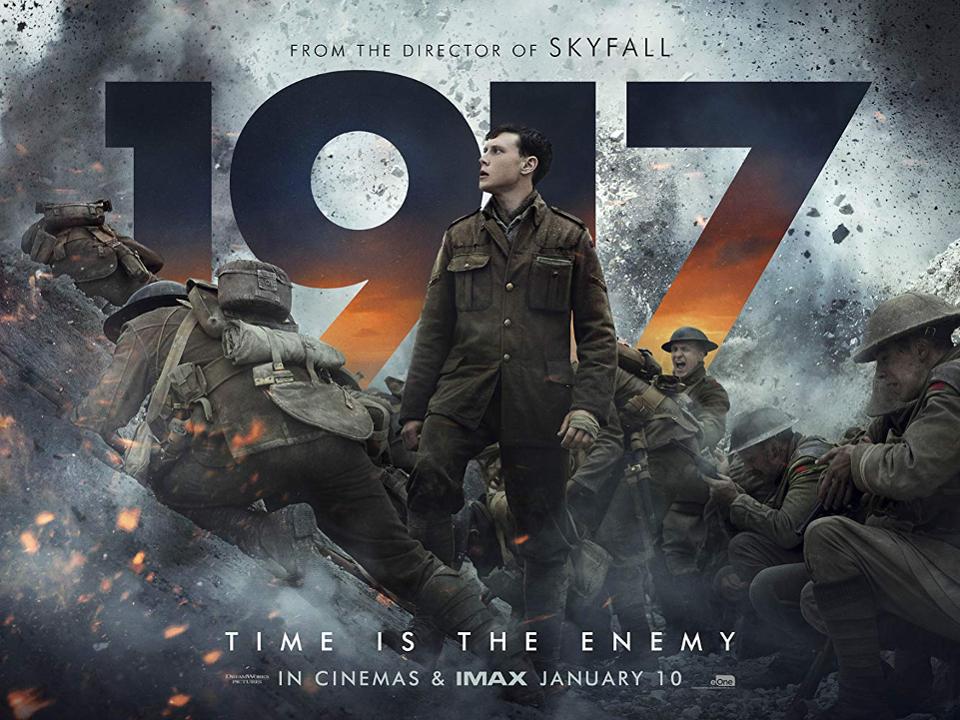 I’ll pass on that old-time religion.

The world dialed up 1917, Schitt’s Creek and Joyce Carol Oates for me in the last twenty-four hours. I emerged with a feeling of not-so-smug superiority.

These people go to a lot of trouble to say what is on their minds.

1917: Sam Mendes directed this museum diorama trying to pass itself off as a movie. I am sure that Sam Mendes has a very neat apartment. I am also sure that he never stepped beyond a proscribed line.

Mendes brings a fastidious eye to the fog of war. He doesn’t do chaos. Each person place and thing in this World War One story is arranged in an aesthetically pleasing manner.

Mendes brings his mastery of scenic composition to a decomposing world.

1917 is a reassuring lie. Carnage doesn’t have to be gross after all.

World War One was a massively unnecessary tragedy, and an opportunity for Mendes to show what a technically brilliant filmmaker that he is.

True storytelling is a lot harder than mastering a craft. A real artist learns a craft or crafts and then forgets them. He or she is guided by an urge to communicate an earned truth from the artist’s perspective.

1917 is the type of movie that gets awards. It is impossible not to (momentarily) admire its complex technique. Look how beautifully Mendes arranged those dead bodies. Each limb is so expressive. Look at the stark mural of dead cattle precisely placed across the battlefield. Look at the engaging abstract geometrical forms of the bombed out city. A lonely silhouette of a tree — the only survivor of a forest that was destroyed — stretching its black limbs into a rust-colored poisoned sky.

I miss Robert Altman. He did confusion so well. His work wasn’t pretty but it was beautiful.

1917 famously features a structure of being two seemingly unedited tracking shots. I thought constantly about these feats of cinematography — war, death, man’s inhumanity to man, loss, friendship, survival, a lone man moving through an absurdist hell-scape of the dead, and dying — not so much. I once did sales for a photographer who did baby pictures. He also hung up shots in his store showing off what a good picture taker he was.

Altman just picked his shots to tell the story.

Mendes said as he picked up a Golden Globe that he told the story of 1917 in the hopes that something like World War One — the most brutal war according to Mendes — would never happen again. He must have missed World War Two and hundreds of other wars. He said nothing about the potential war with Iran.

Watching 1917 is like having a conversation with a very well-spoken man who doesn’t know what he is talking about, and doesn’t much care about his subject. His goal is to inspire your oohs and ahs for his brilliant vocabulary and elocution.

I worked in a corporate law firm once that hung inoffensive visual art in its waiting area. The paintings posed as provocative art, but were really inoffensive interior decorations.

Just what we need at the moment — phony empathy.

Thank God we don’t have to suffer and struggle like the action figures of World War One. And aren’t we good people to feel sorry for them. And isn’t Sam Mendes so cute in the way he busts his ass for our approval. Now let’s go to that restaurant with the engaging atmosphere and the charming waitstaff.

Schitt’s Creek: Speaking of sentimentality, I met Eugene Levy once. He was holding court with a big group of people, talking about making money. He was very serious about every possible dollar, like the couples my parents used to play poker with when I was a kid.

Eugene Levy was on SCTV. One of that show’s famous sketches was “The Sammy Maudlin Show.”

Schitt’s Creek is a family affair. Eugene Levy co-created and stars on the show with one son, a daughter acts on the show, another son produces.

Here is my imagined story of the Levy family.

Eugene Levy’s father was a businessman or wanted to be one. His mother wanted to act and played the piano at family gatherings.

Eugene Levy has a gay son and has never been disturbed or conflicted about his son’s sexuality.

Eugene Levy worries a lot about his children’s financial security. He and his gay son created this show and employed the rest of the clan.

The entrepreneurial gamble paid off, and everyone is making a nice living.

The entire Levy family believes in hard work, friendship, finding significant others who are kind and not flashy, community and humor. The Levys are very nice middle-class Canadian people.

Since they are Canadian, the Levys’ entrepreneurial spirit is leavened with socialism and good manners.

Schitt’s Creek is the Levys’ story ruined by the crafts of sitcoms and soap operas. I’d rather just see the Levys — like the one time I met Eugene Levy. I’d rather just see the actual people. I don’t need the cliched and cloying expressions of formulaic romantic love or friendship , the broad slapstick and mugging, the stale situations — Dad put poison oak in the floral arrangements! — the couples who obviously love each other but take years to get together, the tidy morals-of-the-story at the twenty-six minute mark, the ersatz warmth awkwardly play-acted by genuinely warm people.

You don’t need to watch Schitt’s Creek. My few paragraphs here, unburdened by so much unnecessary craft is better than the whole show. But you may want to watch the show anyway to support these sweet-natured mopes who wouldn’t hurt a fly.

Law is a lot easier than writing and not nearly as important. Practicing law is a defined occupation. There are basics that all practitioners need to know and accept.

Writing is something one creates oneself. You don’t learn how to write in school. You learn by living your life.

No, not all good writing.  Taboos, sometimes, sure … but I am much more diverse than that … Oates defines her work as the exploration of taboos … good even interesting … but I don’t want to burn incense in front of it … can’t she just settle for being a good writer … she sets up her students to fail — at being her!

Usually something happens to me. I wonder about it — then I get an impulse and I start writing about it.

That’s how I do it. Find your own way. Don’t come to me for answers when all I want to do is talk to you. Being an audience is a creative act — you have to show up and make the meaning for yourself. I write to make meaning for myself. I can’t make it for you. If you engage with my words then you have to come up with something.

Oates says that everybody has at least one story to tell.

I say that I am living a story that won’t end until I die.

Actually, stories don’t ever end. They morph into other stories.

Oates is selling seats in her class. Everybody lives a story. Not everyone can tell it.

Writers tell everyone’s stories — not just their own.

But for me personally, I like the examples of visual artists — where the nature of expression leads to more innovation of the form.

I don’t need any rules regarding craft.

I start with the thing that I am compelled to say, and I figure out the craft as I go along.

but no need to be so goddamned precious about it.

the flower of beauty.